"That's all, folks,'' the client said as she folded a purple shopping bag.

Kaufman has owned Karen's Consignment Boutique on Route 18 since 1995. She said she relies on a core of approximately 50 women to stock the store with a variety of gently used women's designer bags, shoes in sizes 6 to 11 and clothing in sizes 2 to 22. She also carries furs, new jewelry and maternity clothing.

"I have plenty of (size) smalls because everyone grows out of them and gives us their smalls,'' said Kaufman, a friendly, no-nonsense woman dressed entirely in black. She wears chocolate-brown nail polish, sleek eye glasses and a generous diamond ring.

Kaufman said she splits the profits 50-50 with clients and sells clothing at 20 percent of the regular retail price. After 60 days, if an item hasn't sold, she returns it to the client or donates it to a number of local charities. Past recipients have included Amandla Crossing transitional housing program in Edison.

What that means -- at Karen's, at least -- is that you won't dig up that wacky shift dress that your mom rocked back in the summer of '69. But you might find a Louis Vuitton graffiti pochette for $150. Kaufman said she doesn't accept knockoffs or clothing that's more than 2 years old.

She admitted that eBay most likely has put a dent into her business "because people can sell (clothing) themselves. (But) it's obviously not great for all people. People don't have the time'' to sell their clothing online.

The small store is packed with big names: premium denim by Seven For All Mankind ($24.50) and Chip and Pepper ($59); bags from Louis Vuitton, Prada, Tod's, Kate Spade, Chanel and Chloe going for $95 and up; Abercrombie & Fitch T's going for $12, a Lilly Pulitzer eyelet sun dress for $75.

Karen's is wedged into a strip mall directly across the highway from one of its main competitors: T.J. Maxx. Kaufman said she dukes it out with discounters such as T.J. Maxx, Marshalls, Loehmann's and outlet stores. 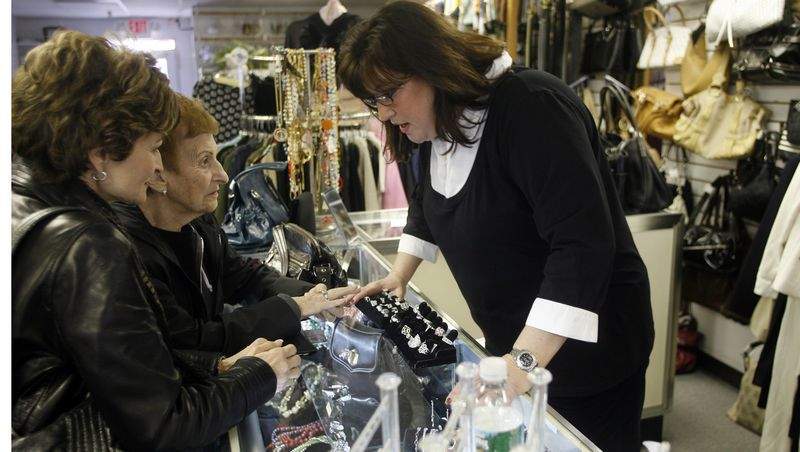